Vowels are made without an obstruction in the vocal tract, so they are quite sonorous. The body of the tongue moves in the mouth to shape each vowel, and for some vowels, the lips are rounded as well. Linguists classify vowels according to four pieces of information: tongue height, tongue backness, lip rounding, and tenseness.

1. What is the articulatory description for the vowel sound represented by the IPA symbol [i]?

2. What is the articulatory description for the vowel sound represented by the IPA symbol [ɛ]?

3. What is the articulatory description for the vowel sound represented by the IPA symbol [ɑ]?

Remember that the difference between consonants and vowels is that consonants have some obstruction in the vocal tract, whereas, for vowels, the vocal tract is open and unobstructed, which makes vowel sounds quite sonorous. We can move the body of the tongue up and down in the mouth and move it closer to the back or front of the mouth.  We can also round our lips to make the vocal tract even longer.

Take a look at the IPA chart for vowels.  Instead of a nice rectangle, it’s shaped like a trapezoid.  That’s because the chart is meant to correspond in a very direct way with the shape of the mouth and the position of the tongue in the mouth. We classify vowels according to four pieces of information:

The high/mid/low distinction has to do with how high the tongue is in the mouth.  Say this list of words:

Now do the same thing, but leave off the “b” and the “t” and just say the vowels.  You can feel that your tongue is at the front of your mouth and is moving from high in the mouth for [i] to fairly low in the mouth for [æ].

We can do the same thing at the back of the mouth.  Say the words boot, boat.

Now do it again with just the vowels, [u] [o]. Your lips are rounded for both of them, but the tongue is higher for [u] than it is for [o]. The lowest vowel at the back of the mouth is [ɑ]. We don’t round our lips for [ɑ], and we often drop the jaw to move the tongue low and back.

We also classify vowels according to whether the lips are rounded or unrounded. In Canadian English, there are only four vowels that have lip rounding, and they’re all made with the tongue at the back of the mouth:

The final piece of information that we use to classify vowels is a little trickier to explain. English makes a distinction between tense and lax vowels, which is a distinction that a lot of other languages don’t have. Tense vowels are made with greater tension in the muscles of the vocal tract than lax vowels.  To feel this difference, say the two words sheep and ship. And now make just the vowel sounds, [i], [ɪ]. The [i] sound in sheep and the [ɪ] sound in ship are both produced with the tongue high and front, and without lips rounded. But for [i], the muscles are more tense than for [ɪ]. The same is true for the vowels in late and let, [e] and [ɛ]. And also for the vowels in food and foot, [u] and [ʊ]

It can be hard to feel the physical difference between tense and lax vowels, but the distinction is actually an important one in the mental grammar of English.  When we observe single-syllable words, we see a clear pattern in one-syllable words that don’t end with a consonant.  There are lots of monosyllabic words with tense vowels as their nucleus, like

do, blue, through, screw

But there are no monosyllabic words without a final consonant that have a lax vowel as their nucleus.  And if we were to try to make up a new English word, we couldn’t do so. We couldn’t create a new invention and name it a [vɛ] or a [flɪ] or a [mʊ]. These words just can’t exist in English. So the tense/lax distinction is an example of one of those bits of unconscious knowledge we have about our language — even though we’re not consciously aware of which vowels are tense and which ones are lax, our mental grammar still includes this powerful principle that governs how we use our language.

Here’s one more useful hint about tense and lax vowels.  When you’re looking at the IPA chart 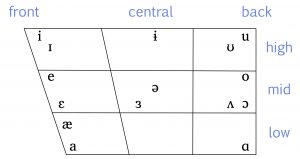 So far, all the vowels we’ve been talking about are simple vowels, where the shape of the articulation stays fairly constant throughout the vowel. In the next unit, we’ll talk about vowels whose shape changes. For simple vowels, linguists pay attention to four pieces of information:

Essentials of Linguistics by Catherine Anderson is licensed under a Creative Commons Attribution-ShareAlike 4.0 International License, except where otherwise noted.