The Web, Publishing, and Ourselves is a new open textbook that critically explores the relationship between technology and publishing, as well as the many ways in which technologies are shaping our personal lives.

Notice something that’s missing? Want to recommend additional reading materials? Please let us know by participating in our open review process. We appreciate your feedback, ideas, and suggestions for how to improve this continually evolving resource.

As Gopnik (2011) pointed out in the last chapter’s readings, people throughout history have reacted to changes in technology as being inherently positive or negative. While his examples describe archetypical reactions to technological shifts, we can see these points of view reflected in the literature on how the web has grown from its initial conception to where it is today. As a society we have varying views on technology, our relationship to it and the value we place on it, but if we are to create a critical framework in which to view technology and understand how and why these changes have occurred we need to examine the web through a historical lens.

In the previous chapter we explored how the web, as a free and open democratic space, came into being. These principles included ensuring the web was decentralised, non-discriminatory, open, and interoperable. In this chapter’s readings, we will explore how in just 30 years the web has changed from being a free and open space to a highly commodified one, controlled by a few massive conglomerates. Just as the German philosopher Jurgen Habermas claimed that the coffee houses of 18th century Europe gave way to the creation of a public sphere where free and open dialogues could take place among Europe’s elite males, one could argue that the early web provided a similar public sphere were free and open democratic discussion could thrive (albeit, also to a limited segment of society). Much like how the idealistic nature of the Habermasian public sphere eventually dissolved under the rise of consumerism, so too has the web’s open and free spaces been guided and manipulated by capital. 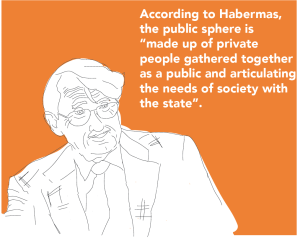 The early days of the web looked almost nothing it does today. As Hossein (2015) points out, the early web was shaped and defined by blogging. Here, people could freely share points of view, news, analysis and questions. Within this community, the hyperlink and linking out was the standard and “represented the open, interconnected spirit of the world wide web” (Hossein, 2015). People linked what they saw and liked, and just like the salons described by Habermas, blogs created spaces where ideas could flow freely and thoughts could be exchanged openly. The advent of platforms, such as Twitter, Instagram, Facebook, and the rise of algorithms has doctored this free and open form of sharing. Now, people don’t just browse and operate on the web, they operate through platforms designed to control and shape what and how users see. The reach of an article or a thought is still determined to some degree by human users sharing original content, but it is also largely determined by algorithms that are optimized to increase the amount of time individuals spend within the platform (where they can be advertised to).

As Chimero (2018) discusses, commercialism has crept into the public sphere of the web. Carmody (2018) adds that commercialization has created “pseudo-public spaces whose experience continually degrades” rather than true public spheres. It is common now for platforms and algorithms to shape what we see and keep us within the app (notice how platforms like Instagram and Facebook do not often link out of their platform). This practice is not limited to large platforms. More and more often, websites only link back to themselves, so as to not not send users (customers) away from their commercialized spaces. Looping within these platforms keeps the viewer trapped within a specific commercial web, allowing for greater degrees of control over content.

Maintaining the users’ attention and keeping them trapped in a loop of commercialized web is not where the power of these conglomerates ends. The large conglomerates that run the majority of the web are made up of a few familiar names—Microsoft (owners of over 225 companies), Google (200 companies), Facebook (72 companies), and Amazon (40 companies). Unlike the tech industries of bygone years, these behemoths don’t produce “tech” in the same way. In fact, many don’t produce technology at all. Dash (2016) points out that their reach is in everything from the gathering and selling personal data, to producing TV shows, to selling groceries, and even laboratory testing. Yet by operating  under the guise of the “tech industry “, these conglomerates are outside of the reach of outdated regulations. This leaves the decision on how to operate in their own hands, to self-regulate.  The lack of regulations extend far enough that these companies are not only the gatekeepers of their own analytics and records, but hold more information on the general public than most governments. 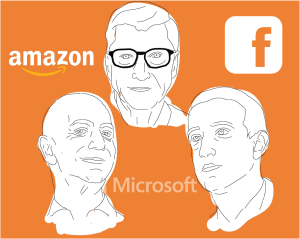 The Web, Publishing, and Ourselves by Juan Pablo Alperin is licensed under a Creative Commons Attribution-NonCommercial 4.0 International License, except where otherwise noted.