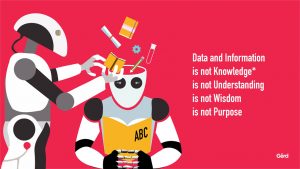 The semester began with open ended discussions on students’ impressions of what AI can and cannot do, of where they thought AI was headed, and whether they had concerns about the immanency of the singularity. With that as backdrop, students dove in to a set of readings that delineated the scope of cognitive science. As the unit came to a close, students revisited their early impressions and wrote about their initial learning journeys. The realization that their initial fears and assumptions were overblown was a little bittersweet and as a group, students decided that their first essays would take the form of an “open letter” to help others advance in their understanding of where cognitive science and AI work is really at, when one subtracts media sensationalism from the mix. In chapter 1, student-author Johannah Jonston nicely captures the essence of our first few weeks of class.

The Singularity Isn’t Nigh and Here’s Why by Erica Kleinknecht, PhD is licensed under a Creative Commons Attribution-NonCommercial-NoDerivatives 4.0 International License, except where otherwise noted.