I have never been more excited to write a blog post. The west coast rapper, Black Hippy member, Top Dawg Entertainment member, Grammy-winning, Pulitzer Prize-winning, K-dot, Kung foo Kenny, Kendrick Lamar Duckworth encapsulates American Literature. The piece that will be the focus of this post will be the song “DNA.” (Dead N**** Association) on his most recent album, DAMN. Lamar has always been known as a controversial rapper for his messages focused on religion, peace and war. Specifically, the song “DNA.” has a soundbite from FOX News guest anchor Geraldo Rivera, who also references Lamar’s lyrics on the track “Alright”: “And we hate the po-po, want to kill us in the streets fo’ sho” (Lamar). So, how does “DNA” relate to American Literature? Well, the lyrics contain themes of resistance, endearment, call to action, eugenics, slavery, and to put the cherry on top, race disparity. 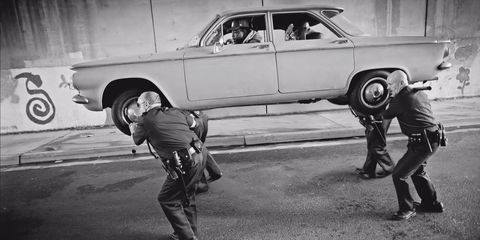 Lamar’s lyrics on the track “DNA.” start off with,

Lamar sets the tone to establish that he embraces his identity by owning his genetics. He isn’t just black, he is his race, with millions before him. All that has surrounded African Americans from slavery to today is loyalty, royalty, war, peace, power, poison, pain and joy–an emotional power struggle in the last hundreds of years since slaves were first brought to the United States. Lamar is providing the feelings that the African American community has felt since the beginning, describing that he is rich with knowledge of his ancestors before him. Lamar is almost suggesting that he is more powerful than his oppressors because of his race, not his status.

The second half of the track covers how he feels towards his oppressors and directs it towards them. The lyrics are as follow,

You see fireworks and Corvette tire skrrt the boulevard. I know how you work, I know just who you are. See… you’s a b***h, your hormones prolly switch inside your DNA. Problem is, all that sucker s**t Inside your DNA. Daddy prolly snitched, heritage Inside your DNA. Backbone don’t exist, born onside a jellyfish, I gauge. See, my pedigree most definitely don’t tolerate the front. S**t I’ve been through prolly offend you. This is Paula’s oldest son I know murder, conviction burners, boosters, burglars, ballers, dead, redemption Scholars, fathers dead with kids and I wish I was fed. Forgiveness, yeah… soldier’s DNA (Lamar).

Lamar nails this, clearly identifying his oppressors as power-indulgent, white gluttons that not only disagree with his message, but criticize it. He conveys that they lack the perspective and backbone to say anything directly to him. Someone who grows up in areas where there are Corvettes burning out and fireworks without an alarm that there maybe a threat of gun violence should take a step back and keep their uneducated opinions to themselves. They lack the ability to say anything to Lamar personally and it’s because Lamar grew up in an environment that he could overcome which gives him power, while the gluttons attain their power by their color, not who they are. This suggests that those who are gluttons inherit their DNA from cowardice and intolerance. Lamar inherits his DNA with power and knowledge.

On the third and final verse, Lamar sends a message to the gluttonous and powerful, specifically targeting FOX News and it’s guest anchor, Geraldo Rivera. Before the verse there is a soundbite of Rivera talking about Lamar’s lyrics. Rivera states, “This is why I say that Hip-Hop has done more damage to young, African Americans than racism in recent years” (Rivera). This is it, these are the monsters the Lamar is talking about. His message holds no restraint,

Tell me somethin’, you mothaf***as can’t tell me nothin’. I’d rather die than to listen to you. My DNA not for imitation, your DNA an abomination. This how it is when you’re in the Matrix, dodgin’ bullets, reapin’ what you sow and stackin’ up the footage. Livin’ on the go and sleepin’ in a Villa, sippin’ from a Grammy and walkin’ in the buildin’. Diamond in the ceilin’, marble on the floors, beach inside the window, peekin’ out the window. Baby in the pool, godfather goals, only lord knows I’ve been goin’ hammer, dodgin’ paparazzi, freakin’ through the cameras. Eat at Four Daughters, Brock wearin’ sandals yoga on a monday, stretchin’ to Nirvana. Watchin’ all the snakes, curvin’ all the fakes. Phone never on, I don’t conversate I don’t compromise, I just penetrate. Sex, money, murder, these are the breaks, these are the times, level number nine. Look up in the sky, ten is on the way. Sentence on the way, killings on the way, motherf***, I got winners on the way. You ain’t s**t without a body on your belt, you ain’t s**t without a ticket on your plate. You ain’t sick enough to pull it on yourself. You ain’t rich enough to hit the lot and skate. Tell me when destruction gonna be my fate, gonna be your fate, gonna be our faith. Peace to the world, let it rotate. Sex, money, murder, our DNA (Lamar)

Wow, speechless. I could break down this last verse for twelve hours. The dynamic style that Lamar incorporates into this track is beautiful. It is interwoven with American Literature to the point where it is ready to burst at the seams. We as the listener understand the double entendre. DNA isn’t just genetic, but it is a message. You can’t control someone’s life, nor can you own it. Lamar is retaking his identity not only for himself, but for all African Americans. He would rather die than succumb to the message that white critics are projectiing, realizing instead that those who are in power now are powerless without their tools of oppression. Lamar’s music responds to his critics in this way: You think black people are all about sex, money and murder? Good, they will own it and it will empower them to resist. You can murder African Americans in the masses and they will still resist because those who oppress will be judged by god and reward the oppressed. Lamar conveys that black people will replace those who are the rich and powerful by eating with high class and listen to Nirvana while doing yoga–a rotation if you will that does not bode well for white people. During his performance of “DNA” at the Grammys, Dave Chapelle made a guest appearance to state, “I just wanted to remind the audience, that the only thing more frightening than watching an honest black man in America, is being an honest black man in America” (Chapelle). Chapelle is reminding us that resistance isn’t easy; in fact, it’s horrifying. Although, uncomfortable and hard, resistance will always prevail.

This style of American Literature is important. Lamar won Album of the Year with DAMN. This is the modern form of story telling that reaches all who are familiarized with Hip-Hop and radio. Those who hear the message will understand and share it. Those who don’t will still like the song because it is an absolute banger and they can relate to it. When I first listened to it, I thought that it was a call to say that you are better than other people, specifically those who you don’t like. It is genius to make a product that sends a message and will be shared by millions whether they agree with it or not. It clearly shows that it is successful. It reminds me of flavored medicine or vitamins. The illusion of a gummy or a sweet drink that is actually something that people need to take, in this case hear.

This class has absolutely changed my understanding of media and entertainment. Specifically, The Heroic Slave has left a profound affect on me. I am more of a Malcolm X fan than a Martin Luther King fan. Provoke and shake the world with a message that motivates action. Make change that empowers a community to rise above disenfranchisement. Lamar’s “DNA” resembles a lot of “An Address to the Slaves of the United States of America” by  Henry Highland Garnet. Garnet talks of wanting to die before satisfying slaveholders and calls for millions to rise up. He also talks about what would happen if the roles were flipped and blacks had power over whites. This message is punctuated in “DNA,” the resemblance between the two are uncanny. If I hadn’t taken this class, I would have never associated the two and that would have been a damn shame. It is with no reservation that I express my gratitude towards Dr. Goode for not only teaching this class, but for making a difference with the texts that she provides.

DNA. Music Video (Expletives and use of the N-Word)-

Dave Chapelle Grammy’s quote (3:30, although I implore you to watch the whole video due to Kendrick’s other ways of portraying American Literature)-

The Open Anthology of Earlier American Literature: A PSU-Based Project by John Galusha is licensed under a Creative Commons Attribution 4.0 International License, except where otherwise noted.