The 100 is a very recent  American T.V. series (season 4 ended in May of 2017) in which viewers get a sense of the world, but specifically America, through the lens of what it may be like after nuclear war destroys the planet. We don’t necessarily get out of the nationalistic viewpoint of the United States. Rather, there are snippets of transnational themes and the plot even involves space into the concept of what makes something American literature.

**Spoilers possibly ahead, but I’m not even sorry. I need this grade.**

The show begins with juvenile delinquents being sent down from a united space station in which 13 countries came together to try to survive in space until the Earth is able to safely be populated again. They are used as test subjects to see if Earth could be inhabited earlier than anticipated. Once there, the teens must try to survive without ever having set foot on the planet before. They also must interact with the Grounders, a native population that they find out survived and thrived after the bombs went off. The natives, as they always are in American literature, are hostile towards the kids. They attack with primitive weapons like spears and swords, killing kids who stray too far from the drop ship, and even using some as bait to draw in more victims. They are portrayed as barbarous and ruthless, even as the seasons go on.  Mary Rowlandson’s Narrative was one of the first instances in which we saw a white person describing torturous behavior at the hands of a savage native people, “Now away we must go with those barbarous creatures,with our bodies wounded and bleeding, and our hearts no less than our bodies” (Rowlandson). In The 100, the natives are shown as even more heartless and Rowlandson could portray. The Grounders not only have the phrase “blood must have blood,” showing their vengeful viewpoints on the world, they follow that pact even among their own tribes. When someone has betrayed their group, they are killed, usually through slow torture. Emotions are taken out of their existence almost entirely, all but rage seem to be absent from their lives, making them appear even more savage than how we would read of the natives in Rowlandson’s narrative. 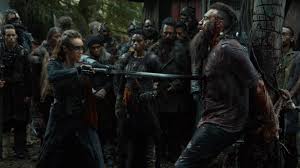 The 100 portrays the Grounders as animals, less than human. They don’t speak until a word even though much later it is revealed that they are capable of comprehending and fluently speaking English. Rowlandson’s narrative works to create the same image of the natives she encounters and even shows the barrier between languages and comprehension, “When I came I asked them what they had done with it; then they told me it was upon the hill. Then they went and showed me where it was, where I saw the ground was newly digged, and there they told me they had buried it” (Rowlandson). Here, it’s less likely that their language was being understood, however Mary Rowlandson grasped the concept that her child had been buried. The customs of the different people become very important in both of these products of American culture. For Rowlandson, burial would’ve still been the way in which her child would have been taken care of, even by her own people. However it’s important to note that if the natives were as heartless as described, they wouldn’t have even bothered to take care of the body at all. The child would’ve been cast aside and they could’ve just gone on with their day. In The 100, those from space have different customs around death. Rather than say “go kill yourself,” they use the phrase “go float yourself” because the way people were put to death in space was by floating their bodies outside of the station. Once on Earth, they begin to bury the bodies of those they have lost and were able to recover. The Grounders differ in that they set fire to the bodies to be rid of them. There’s a scene in which the character who massacred a village of Grounders was killed and then even his body was burned with their people. Having his body disposed of in a different way, rather than his own custom, was  a lesson to The 100 as well as an extension of their vengeful practices.

Despite her mistrust in the natives and her description of the peoples as “savage creatures,” she is much more than willing to follow their medicinal practices in order to try to save herself, ” as he took oaken leaves and laid to his wound, and through the blessing of God he was able to travel again. Then I took oaken leaves and laid to my side, and with the blessing of God it cured me also” (Rowlandson). The 100 follow a similar pattern, although they learn through the concept that a group of people wouldn’t continuously use poisoned arrows unless they had developed a cure. In both situations, the outsiders (hello people we call “Americans”) use native knowledge to solve their problems, but pat themselves on the back for figuring things out “independently.” Both Rowlandson and The 100 lack any sort of survival skills in the situations that they find themselves in, primarily that’s the wilderness.

Wilderness remains as a large theme in The 100. The majority of the plot take place in the woods, often in uncharted lands (at least to Skaikru anyway), where there is a lack of technology. When technology is present, it is always used for evil against the populations. The use of blood transfusions are detrimental to the Grounder and Skaikru populations for the use of Mountain people. The Mountain people use guns, reaper sticks, acid fog, and basically any other form of technology against people who aren’t there own and only cause harm to those around them. The fact that an A.I. was the “person” that detonated the nuclear bombs that destroyed Earth also really highlights the anti-technology stance of the show while it glorifies the use of wilderness and basic survival skills.

In both texts there is a view and attempt a the definition of nationhood. There are strong cases of “us versus them” and those lines can get blurred from time to time. For Mary Rowlandson, the enemy was very clear to pinpoint as she experienced a war between natives and her own people. For The 100 (Skaikru), the makeup of the enemy shifted continuously as the plot developed. They would partner with the Grounders they first encountered to fight another tribe of Grounders elsewhere and for different reasons. Everything took place in what used to be America, but since the wars completely destroyed the world and governments as we know them, it begs the question about if nationality of characters or physical boundaries even define what American Literature is.

The Open Anthology of Earlier American Literature: A PSU-Based Project by Katherine Whitcomb is licensed under a Creative Commons Attribution 4.0 International License, except where otherwise noted.