Obesity is a growing that is starting to show its dangers in the United States of America. No longer is it being ignored, but a front and center problem that is even being tackled by public policy. Gyms are everywhere, and healthy eating is more prominent in today’s culture. People are not concerned so much for themselves, but if they realize what it is doing to the children, then they will act. The real question is with all this innovation and increase in a healthy lifestyle, what is the government’s role in helping its people?

The Risks in Children

Before looking at these policies, one has to look at the problems that obesity is causing for the nation. Children are the future of the country and obesity, if not controlled, can lead to a lifetime of consequences. According to the Center for Disease and Control () (2016), the problems that can ensue from childhood obesity include cardiovascular disease, breathing problems, joint pains, and even social problems. Parents do not want to see their children go through these problems, but the CDC says these problems stem from environment and behavior (2016). They recommend healthy diets and physical activity to improve the health and weight of a child. The NY Department of Health (n.d.) says statistically that 10 percent of 4 and 5-year old are overweight, which is double from 20 years ago, and it increases with age as 20% of children aged 6 to 11 are obese.

Once a child hits puberty these problems continue and get worse for him/her. This is because puberty is a time of change in a person’s life and the hormonal changes could be affected by one’s chance of becoming obese (Biro & Wien, 2010). Puberty causes weight gain and already being overweight causes an even greater increase (Biro & Wien, 2010). With all these concerns, one has to dive deeper into how the government is helping the children of America.

Many nutritional programs and organizations have been put in place to manage the obesity crisis, especially in the youth. One of these organizations is the United States Department of Agriculture, which is a federal driven program that helps put policies that help children with nutrition and weight problems. (Biro & Wien, 2010). One of these programs is the Special Supplemental Nutrition Program for Women, Infant, and Children better known as the WIC. The WIC promotes the breastfeeding of infants and provides healthy food packages across the country (Institute of Medicine, 2010). Another program is the Child and Adult Care Food Program that helps those in child care. They work on a community level to provide meal and breakfast plans that help 31 million children across the country (Institute of Medicine, 2010).

The Supplemental Nutrition Assistance Program, , is famously known for providing food stamps but is also working on the war against obesity.  Being that food stamps are given to the less fortunate, SNAP knows their target audience and what to do. They have put in incentives to encourage the 47 million they serve monthly to eat healthier (IOM, 2010).  They offer educational programming that is directed to those with a lower educational level. The Healthy, Hunger-Free Kids Act of 2010 provided 3.5 million low-income children food every day by providing healthy choices which teach children what to eat (IOM, 2010).

Children should not be cooped up watching television, playing video games or being on the computer. The government is fighting this with campaigns that promote children to do more outdoor activities. One of the main government figures in recent times to tackle this problem is the former first lady, Michelle Obama. She helped enact the Healthy, Hunger-Free Kids Act of 2010. This entails different food programs geared towards being healthy at schools (IOM, 2010).

One of her big motivations was when the U.S. Surgeon General released his view for the future and addressed the risks of obesity for the nation (American Academy of Family Physicians, 2010). This inspired Michelle Obama to commence her Let’s Move campaign, which tackles all the problems parents would face and provides children with more exercise. The campaign made the issue of childhood obesity to be a priority in the nation’s eyes (American Academy of Family Physicians, 2010). The campaign works under an initiative program where if children get a certain about of physical activity they will receive rewards through PALA+ (Let’s Move, n.d.). This type of program encourages healthiness without forcing it which many people enjoy. For more information on the Let’s Move campaign watch the YouTube video at this link https://youtu.be/2oBeuSCfGeg or go to the website https://letsmove.obamawhitehouse.archives.gov. 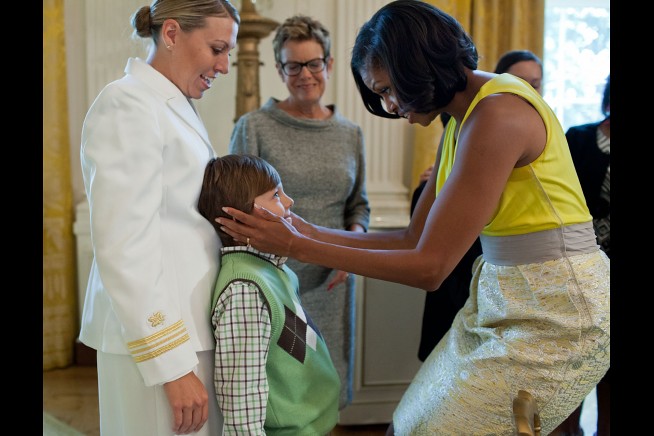 “The Hon. Michelle Obama brilliant & gracious & beautiful 39,” by Charles McCain is in the Public Domain

The US government continues to address the obesity epidemic (see the infographic below).  They are doing it by informing the public of obesity risk factors and promoting programs that increase healthy eating and physical activity.. Many concerns for childhood obesity have informed the public of the risk and future of the country. With recent leaders such as Michelle Obama there is a bright future for the U.S. There is still a lot of work to be done for the fight against child obesity by the government and its citizens.

agency of the Department of Health and Human Services responsible for the prevention and control of disease and for health promotion and education. The CDC was established in Atlanta as the Communicable Disease Center in 1946, charged with preventing the spread of malaria. Under its present name, the agency monitors the spread of all infectious diseases within the U.S. and provides assistance to other countries and agencies in disease prevention and control. It also provides expertise and assistance to other federal, state, local, and private disease prevention agencies. Additionally, it develops and conducts environmental health and general health promotion programs

"The Supplemental Nutrition Assistance Program (SNAP) is the largest federal nutrition assistance program. SNAP provides benefits to eligible low-income individuals and families via an Electronic Benefits Transfer card. This card can be used like a debit card to purchase eligible food in authorized retail food stores."

The Government: Fight Against Child Obesity Copyright © 2020 by Federico Martinez. All Rights Reserved.