I first became interested in epigenetics around 2010/2011. I know this because I trawled my emails and found a link that I had sent myself on 11 February 2011 to an article in Mother Jones entitled “The illustrated guide to epigenetics”. The first paragraph of this guide is rather prophetic: “This month marks the ten-year anniversary of the sequencing of the human genome, that noble achievement underpinning the less noble sales of 23andMe’s direct-to-consumer genetic tests. To commemorate the scientific occasion, we’ve created an illustrated introduction to one subfield of genetics likely to produce even more dubious novelty science projects someday: epigenetics.” (italics added) This is exactly what happened and what I’ll reflect upon in this post. But what is epigenetics?

Definitions of epigenetics are rather varied and contested, but I’ll go with this one: “Epigenetics explores chemical tags on DNA that have the ability to turn genes on or off … What intrigues many people about the study of epigenetics is the idea that environmental aspects or an individual’s lifestyle may influence these chemical tags and, therefore, impact how our genes express themselves … Perhaps even more intriguing is the discovery that certain epigenetic marks may be maintained and passed on through generations, known as transgenerational epigenetic inheritance.”

Speculations triggered by such intriguing discoveries led to disputes about what some saw as a ‘crisis’ in evolutionary theory, a return of Lamarckism and/or a return of eugenic thinking. On a more peaceful level, there were calls for closer collaborations between biologists and sociologists – a call eagerly taken up by sociologists keen to ‘revitalise’ sociology. And finally, as epigenetics seemed to turn the tables on so-called ‘genetic determinism’ and focused attention on the ‘environment’ (in whatever form), policy makers began to dream about a ‘scientific’ way of dealing with anything from health to poverty and to ask: “Can we use epigenetic information to understand and prevent human disease through environmental modifications (reducing exposures, dietary changes and medication use)?”

Between 2010 and 2012 I began to read more and more about epigenetics in newspapers, academic articles, and on alternative health websites peddling what I began to call ‘epi-woo’ – others call it flapdoodle.  But despite my doubts, I almost got sucked into an emerging cycle of natural and social science hype about epigenetic hopes and fears. In 2013 I wrote a slightly breathless blog post about epigenetics, but I fortunately ended on a cautious note and said: “We have learned many lessons about how quickly scientific advances in, say, cloning, stem cell research or neuroscience can be overhyped (both positively and negatively, in terms of hopes and fears). While studying epigenetics from a social science perspective, we should try not to contribute to this emerging hype. While observing and watching over the emerging science, we should also pay attention to how its results are transformed (and perhaps over-interpreted) in various societal and political projects.” (For a more detailed discussion of the “political implications of the emerging science of epigenetics in specific policy domains”, read Shea Robison’s forthcoming book on the topic.)

In the same year, 2013, Edith Heard, a Professor at the Collège de France, holding the Chair of Epigenetics and Cellular Memory, tried to reign in some of the emerging hype. In an article for The Guardian she is quoted as saying: “‘Even our epigenetic changes are genetically driven. The code of genetics is the code. It’s the only code.’ But now with epigenetics, ‘people are hoping we can pray our way out of faulty genes’…. ‘It’s our duty as scientists to pass on the right messages. I don’t want to say epigenetics isn’t exciting … [but] there’s a gap between the fact and the fantasy. Now the facts are having to catch up’.” This realistic view of epigenetics didn’t quite stop the hype. In fact, by 2014 epigenetics was, according to Judith Shulevitz, “fast becoming the top topic in pop science”, and, I would add, in pop social science and pop social policy.

Waves of natural and social science hype are still splashing onto the shores of Twitter now in 2016, sometimes broken by boulders declaring #epibollocks (andneurobollocks). It is actually quite heartening to see how blogs and tweets have become a normal part of peer review and are also used to monitor emerging hype. This became particularly apparent recently when bloggers and tweeters scrutinised a popular science article by Siddhartha Mukherjee about epigenetics written for the New Yorker (published 2 May) and then an article on epigenetics, depression and poverty published in Molecular Psychiatry on 24 May.

This doesn’t mean that ‘normal’ academic articles don’t contribute to this process of hype monitoring as well. An article published in 2015 for example is entitled “Neural and behavioral epigenetics; what it is, and what is hype” and says: “some of this research has also attracted controversy and … some overblown claims. This latter problem is partly linked to the shifting sands of what is defined as ‘epigenetics’.” Martyn Pickersgill, an expert in social studies of biomedicine, published an article in 2016 in which he studied efforts by natural scientists practicing epigenetics to engage in ‘epistemic modesty’ and to guard against ‘epistemic ostentatiousness’ and hype.

So it is rather depressing to read comments like this on twitter over the last week or so: “a new exciting & real science obscured [by] tons of over-exposed and shoddy work”, “I think we all should use restraint when discussing epigenetics”, “epigenetics is a useful word if you don’t know what’s going on – if you do, you use something else”, “for some, ‘epigenetic mechanism’ means fake correlation”, “TOO MUCH #EPIBOLLOCKS, TOO LITTLE TIME, EVEN WHEN USING ALL UPPER CASE TEXT” and: “Great read on #epigenetics via @NautilusMag Epigenetics Has Become Dangerously Fashionable http://ow.ly/pvgj300hZBA”. The article referred to in this tweet tries to fathom why social scientists in particular have become so ‘enamoured’ with epigenetics and contribute to feeding the hype that most epigeneticists try to get away from. As Matthew Cobb points out in his book Life’s Greatest Secret: “Epigenetics remains fascinating, but it is an adjunct to our understanding of the complexities of gene regulation and the origins of plasticity, not a radical new model of inheritance and evolution.”

It is rather worrying to see how hype has begun to devalue the concept of ‘epigenetics’. This might harm the real and fascinating study of gene regulation and related topics, as well as the public understanding of and public engagement with these topics.

I close with a cartoon displayed within a blog post by Caroline Relton for the OUPblog on epigenetics and epidemiology, which sort of sums up the current situation: 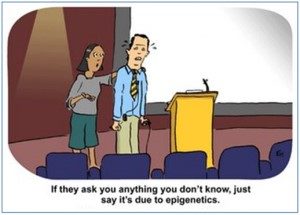 This post was originally published on Making Science Public. 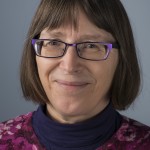 Brigitte Nerlich is a Professor of Science Language and Society at the University of Nottingham and the social science lead within the Synthetic Biology Research Centre. She has had an eclectic career spanning the humanities and social sciences and now directs a research programme funded by the Leverhulme Trust ‘Making Science Public’. Her team studies the opportunities that have emerged for science to be more openly practiced and debated, but also the challenges posed by making science public or by promoting the making public of science as a solution to a variety of problems in society and in politics. She blogs on anything from Pluto to carbon pollution and tweets as @BNerlich.