One of the main distinctions between the inflection of PRIMARY and SECONDARY verbs is the personal endings that each uses. This is clear in the following chart, which shows the overall scheme of verb endings (pdf version here: Greek Verbs: Master List of Endings).

Here we can see that we have learned the three sets of PRIMARY ENDINGS (-μι, –ω or –μαι). Note the differences and similarities between these endings and the SECONDARY ENDINGS. 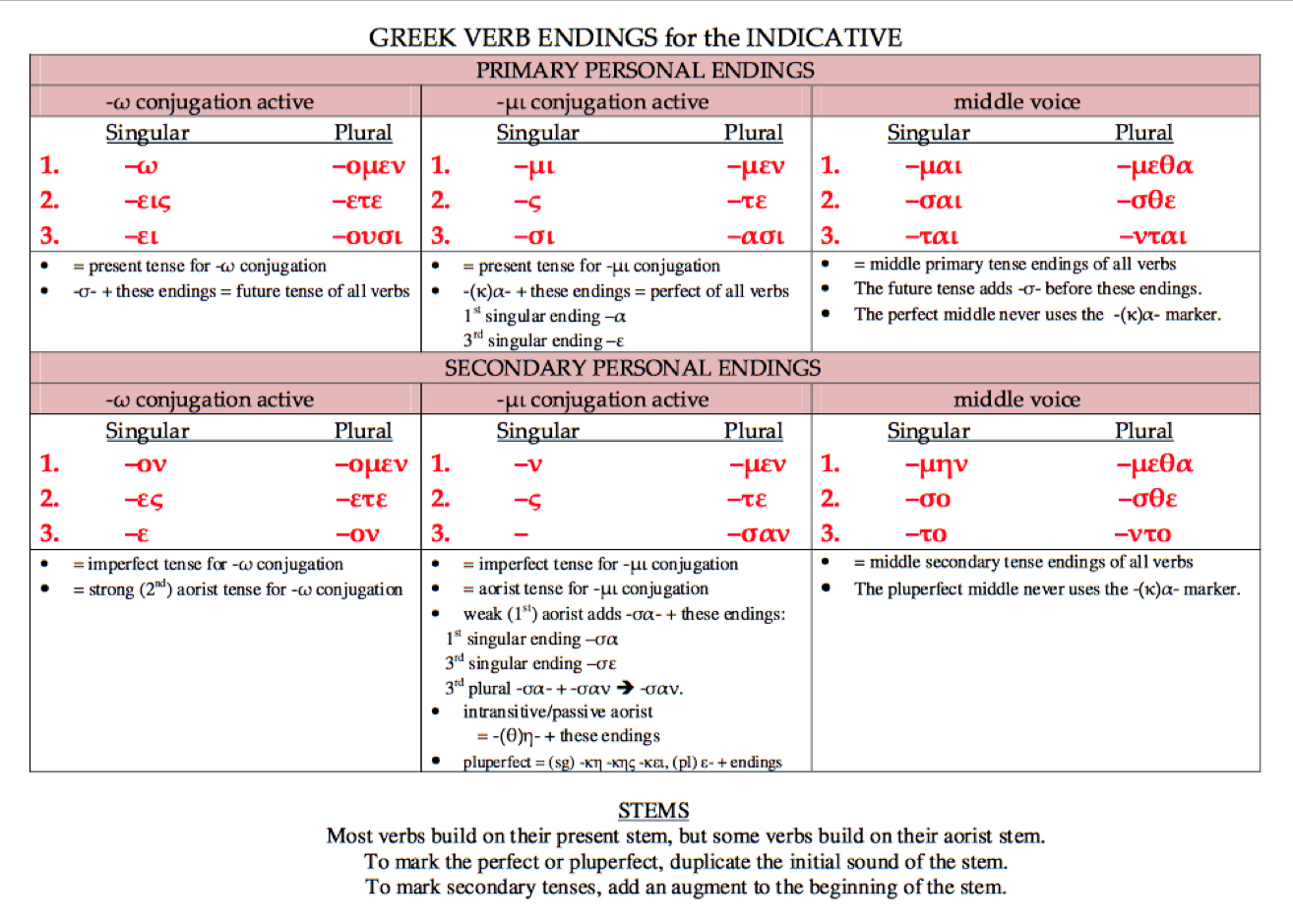 The first secondary tense that we are learning is the IMPERFECT. While it is among the most commonly used tenses of FINITE verbs, there is NO INFINITIVE form of the imperfect.

There are three steps to forming this tense.

1. In the Greek conception, the IMPERFECT tense is essentially the PRESENT tense shifted back into the past. In other words, the IMPERFECT was conceived of as a state of existence, or an action that was still going on in the past (S 1889). As a result, to form verbs in the IMPERFECT, Greek begins with the PRESENT TENSE STEM, not the verb stem.

2. To the beginning of this stem is added the AUGMENT ἐ– (S 429). This augment used to be a separate word that indicated that the verb was in the past. Gradually it became a prefix that signifies the past tense for indicative verbs.

With the addition of the augment, we now have the IMPERFECT TENSE STEM.

Observe that for the secondary endings of –μι verbs, the 3rd person singular has no ending. This form simply stops with the ending of the verb’s present stem.

Note that –ω verbs have nearly identical secondary endings to –μι verbs. The main differences are that  –ω verbs:

Bringing It All Together…

While the formation of the imperfect tense is relatively straightforward, there are a handful of –μι verbs that exhibit slight irregularities:

This verb shows no irregularities!

The remaining –μι verbs on our list all begin with a vowel or diphthong. If the verb stem begins with a SHORT vowel or DIPHTHONG, the augment ἐ– is not added (though see ἔχω, below, for an exception). Rather, the initial short vowel itself, including the short vowel of a diphthong, is augmented through LENGTHENING (S 435)!

If the initial vowel is long – e.g. ἡδύνω sweeten – no lengthening occurs, since the vowel is already long.

This verb has an initial vowel augment, but it does not affect the way the vowel is written, since long and short ι are written the same.

The Imperfect, Indicative, Active of ἵημι

As with ἵστημι, this verb has a long vowel augment, but it does not affect the way ι is written. Notice also that, as with τίθημι, this verb uses –ει– here in the 2nd and 3rd person singular (S 746b).

The irregularities of the imperfect of εἰμί are many, and require memorization (S 771).

Recall that the rules of vowel contraction operate in verbs when the stem ends in one of the short vowels α, ε, or ο. In the imperfect, this final vowel of the stem contracts with the thematic vowel of the secondary endings of –ω verbs.

The Imperfect, Indicative, Active of ἔχω

ἔχω is one of a handful of verbs in which the augment ἐ is added to a verb that begins with a vowel (S 431). In such instances, the augment CONTRACTS with the initial stem vowel:

The IMPERFECT TENSE indicates an action in the past that was ongoing, or used to take place over a period of time. Think of it as a bit of video of an action from the past. Therefore, the imperfect is usually translated as was/were verbing, used to verb, or kept verbing.

Finally, note that the AUGMENT attaches to the beginning of the verb’s present tense stem. Even if the verb is a compound with a prefix, the augment is normally added directly to the STEM, not the prefix. For example:

Ι. Conjugate in full the following verbs in the imperfect. Note that there is no infinitive.

ΙΙ. For the following verbs, determine the most likely form of the dictionary entry (i.e., the Present, Indicative, Active, 1st Person, Singular)

ΙIΙ. For the following verbs, 1). Fill in the correct accent, 2). Change from the present tense to the imperfect tense, 3). Change to its opposite number (singular to plural, plural to singular) in the imperfect. Watch the accents for any contract verbs! And remember the rules for augments added to verbs with prefixes.