So far we have discussed the uses of the subjunctive and optative in MAIN CLAUSES. Now let’s consider how these moods are used in SUBORDINATE clauses.

If, for example, the MAIN VERB of the sentence is a PRIMARY tense (e.g., present, future, perfect) or a MOOD that refers to a possible future action (i.e., imperative, subjunctive, optative):

If the MAIN VERB of the sentence is a SECONDARY tense (e.g., imperfect, aorist, pluperfect): 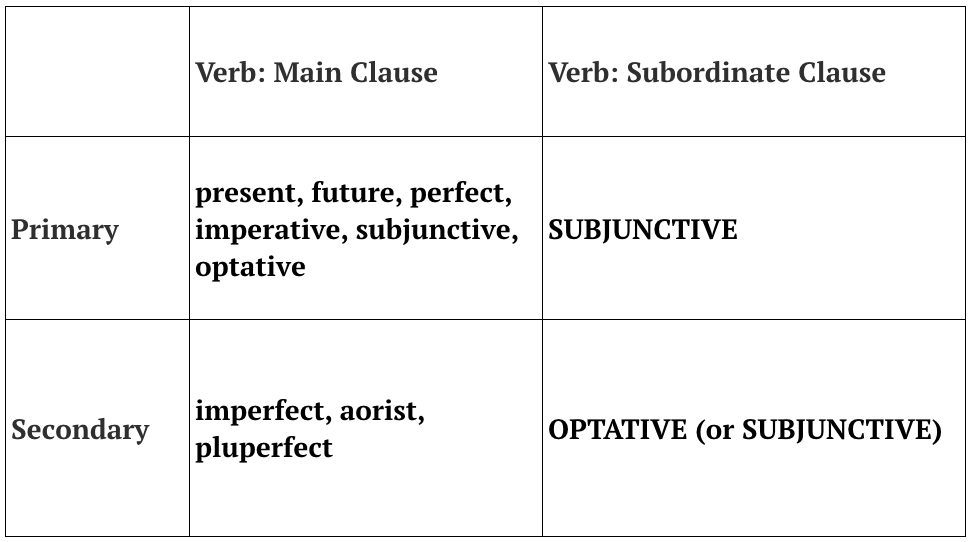 To see how the SEQUENCE OF MOODS operates in Greek, let us look in more detail at PURPOSE CLAUSES and FEAR CLAUSES.

A PURPOSE CLAUSE indicates the purpose for which the action of the verb in the main clause was done (S 2193-2206). For example:

A purpose clause in Greek is introduced by the following conjunctions:

The mood of the verb in the purpose clause is SUBJUNCTIVE or OPTATIVE, as determined by the SEQUENCE OF MOODS. As always, the tenses of SUBJUNCTIVE and OPTATIVE denote ASPECT, not time.

Another common subordinate clause in Greek is the FEAR CLAUSE (S 2221-2232). The clause acts essentially as the direct object of a verb of fearing. For example:

A fear clause in Greek is introduced by the following conjunctions:

If the fear clause expresses a concern that something is happening (PRESENT) or has happened (PAST), the verb in the subordinate clause is INDICATIVE.

If, however, the fear clause expresses a concern that something may or may not happen (FUTURE), the clause follows the same SEQUENCE OF MOODS as purposes clauses.

It may seem odd that the conjunction μή is translated as that, while μὴ οὐ is translated that…not. Why is μή not a negative in FEAR CLAUSES? The reason is that μή after verbs of fearing was originally not a conjunction meaning that, but a particle indicating a prohibition. In other words, φοβοῦμαι μὴ ἀληθές ᾖ, I fear that this may be true, originally developed from I am afraid + let it not be true (S 2222). Over time, μή developed into a conjunction that expressed fear of an undesirable outcome.

1. For each of the following fear and purpose clauses, give the tense and mood of both the main verb and the verb in the subordinate clause. Translate the sentence.