In English, there are two participial forms:

The PAST PARTICIPLE in English is most commonly identified by the ending –ed (e.g., worked, loved), though other forms exist (e.g., eaten, sung). As with the present participle, the participle can stand on its own or introduce a PARTICIPIAL PHRASE. The past participle in English is PASSIVE.

An ancient grammarian once wrote that the Greeks were φιλομέτοχοι, participle-loving. This is no exaggeration. Nearly a third (!) of Greek verbal forms are participles. As a result, mastering Greek participles is essential to reading almost any paragraph of ancient Greek.

As VERBAL ADJECTIVES, Greek participles are part VERB (and so possess tense and voice), and part ADJECTIVE (and so decline to reflect gender, number, case): 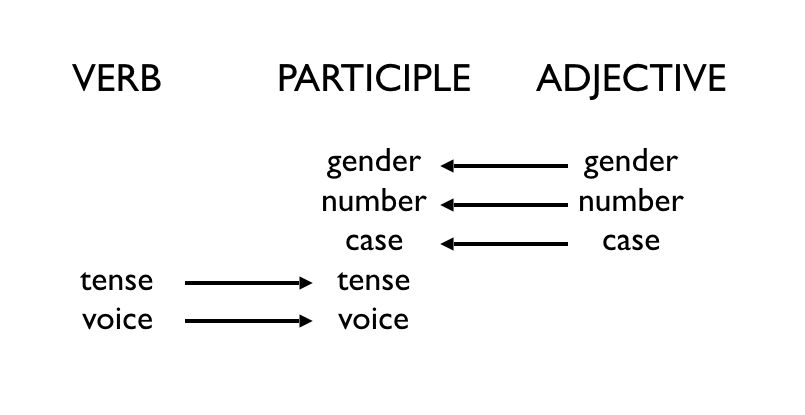 Greek participles exist in three tenses: PRESENT, FUTURE, and AORIST. To form each of these tenses:

Greek participles exist in the ACTIVE, MIDDLE, and PASSIVE voices. To mark these voices:

Finally, Greek participles must be able to reflect the GENDER, NUMBER, and CASE of their ANTECEDENT, i.e., the noun to which the participle refers or modifies. To match the antecedent:

Putting it all together, the formation of a participle looks something like this:

The pattern for ALL PARTICIPLES in the ACTIVE voice is:

Present active participles are built upon the PRESENT TENSE STEM. For –ω verbs, the thematic vowel ο is added before the ντ marker, producing the following pattern:

On their own, these endings form one of the most common and useful participles:

Note that the endings for the feminine are the same as those used by δόξα –ης ἡ glory, judgment, opinion. Note also that the monosyllabic participles ὤν and ὄν do not decline according to the 3rd declension accent rules. Instead, the accent remains on the thematic vowel (S 304).

To form the present active participle of –ω verbs, simply add the inflected forms of ων, ουσα, ον as an ending.

Note that the masculine forms are familiar; they match nouns such as ἄρχων, ἄρχοντος. In fact, ἄρχων is actually a participle that was often used SUBSTANTIVELY as a noun (the ruling man = the ruler).

For athematic (-μι) verbs, no thematic vowel is added before the ντ marker. The result is the following pattern:

In other words, for athematic verbs, add ς, σα, ν as an ending.

Note that when υ is lengthened due to compensatory lengthening, the result is long υ.

Note that the stem of this participle is διδόντ. When ο is lengthened due to compensatory lengthening, the result is ου.

Note that the stem of this participle is τιθέντ. When ε is lengthened due to compensatory lengthening, the result is ει.

Note that the stem of this participle is ἱστάντ. When α is lengthened due to compensatory lengthening, the result is long α.

Note that the stem of this participle is ἱέντ. When ε is lengthened due to compensatory lengthening, the result is ει.

Recall that ALL verbs are THEMATIC (-ω) verbs in the FUTURE tense. So to form the future active participle:

About to show: Future Active Participle of δείκνυμι show (S 662)

Ι. Fill in the blank.

1. All PRESENT ACTIVE PARTICIPLES are formed according to the following pattern:

3. For athematic (-μι) verbs, no thematic vowel is added before the ______ marker. Predictable sound changes yield the following endings for the nominative singular:

ΙΙ. For each of the following verbs, provide the NOMINATIVE and GENITIVE SINGULAR, in all genders, of the PRESENT ACTIVE PARTICIPLE.

ΙΙΙ. For each of the participial forms, identify the tense, voice, gender, number, and case. Note that there may be more than one possibility for each category.