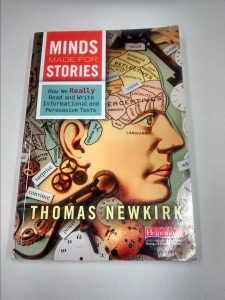 We all tell stories. For humor. For clarifying our view of the world. For asserting our identity. As Thomas Newkirk, a composition scholar, argues in Minds Made for Stories, story is an “embodied and instinctive mode of understanding” (23). Telling stories is one way we use language as a resource to create and build relationships. When we use language to recount events in our life, we are deliberately utilizing strategies in order to enact a particular type of response to our words. In effect, again relying on Newkirk, “Narrative is there to help us ‘compose’ ourselves when we meet difficulty or loss.” Literally, we compose (write) ourselves into being while also composing (calming or settling) ourselves into a particular view of the world.

After a long day at work or school, my family informally tells stories about their day—my wife and I chat before our kids emerge to be fed or a teenager at the kitchen counter hangs out and talks while my wife or I finish up dinner preparation.

Most days I commute thirty minutes from Davis County to the SLCC Redwood Campus. One evening several years ago, I couldn’t wait to get home so I could tell my wife about an experience I was still trying to process …

“I was driving on the freeway and a guy started riding my bumper for no reason. I was in the middle lane going five over the speed limit. Can you believe that? What an ass! He wouldn’t back off so finally I moved over to the right,” I said.
“You should be careful out there,” my wife interjected.
“But guess what? The jerk moved over and continued to ride my bumper. I tapped on the brakes. Then―and by this time I was fuming―he pulled alongside me. In my mind I interpreted this as an aggressive move.
“Can you imagine what happened next? He starts pointing at the car not me. I’m still thinking he is being aggressive but then I can tell he is probably pointing at my tire and looks concerned. I pull over and sure enough my back tire is almost completely flat.”
“Are you serious?” said my wife.
“Yeah. Man, I was so stupid.”

As the storyteller here, I subconsciously attempted to engage my wife, the listener, by a variety of means. It seems these techniques are learned at an early age and often employed without much reflection. In fact, I wasn’t fully aware of the techniques I’d used until I stepped back and analyzed the story for this essay.

One technique I used was to amp up the emotional quality, inviting the listener to come along for the ride: “Can you believe that? … Guess what? … But can you imagine what happened?” I also played with genre by starting off with one kind of story, a can-you-believe-what-a-jerk-other-people-are story, a victim story, but then switched to an ironic tale of misunderstanding where I, the storyteller, turned out to be the jerk.

We are naturally rhetorical beings who attempt to engage those around us through narrative—we shape the events in our life so they have a plot, characters, conflict, and some sort of resolution. This means each of you already has a deep rhetorical understanding of how to engage an audience even if you have never heard the word rhetoric nor ever imagined you were using moves or strategies [see the chapter “What is Story” for more on this].

We also use stories to communicate our values to others. Recently standing in the line with two loaves of bread, some milk, and a carton of eggs, I overheard this conversation between what I assume was a young couple—they had a child with them, probably around two. The young woman led off with this question …

“Do you remember Diane from my work?”
“Yeah, the one who had two babies in two years, right?”
“Yes. So guess what?”
“She’s giving them up for adoption?”
“No, silly … she’s pregnant again. But this time she is carrying a baby for some forty-something-year-old woman in California who couldn’t get pregnant. She’s crazy. That’s all I can say. Wacko.”
“No way.”
“Yes way. And, get this, I found out that the woman from California stopped by the office last week. Barb said you could see her thong when she bent down to pick up her bag. She was wearing designer jeans and carrying some sort of Gucci or whatever purse. I mean can you imagine that? She’s just buying a child. It’s like going to the supermarket down the baby aisle and picking one off the shelf.”

Can you see how this story was shaped by the values of the storyteller and assumptions about the audience’s values? Can you imagine how someone with different values or beliefs might have told a very different story about this same surrogate? Note how the word surrogate itself shifts the point of view: a surrogate mother indicates a formalized role created to serve rather than a crazy woman simply trying to make money.

Stories are our attempts to make sense of the world. We narrate our experience in order to connect with others and validate our own experience and self-worth. We shape our identity through these stories. As Julie Beck, senior associate editor at The Atlantic, in “Life’s Stories” explains, “A life story is written in chalk, not ink, and it can be changed.” Beck then uses Jonathon Adler, a psychologist, to expand on this idea: “You’re both the narrator and the main character of your story. … That can sometimes be a revelation—‘Oh, I’m not just living out this story, I am actually in charge of this story.’” From this perspective, stories allow us to be actors or agents, constructing our story to fit our sense of how the world works. There’s now even a discipline called narrative psychology that explores this notion.

Therefore, when we tell stories to family or friends after a long day, absolute accuracy is not what is valued [see “Is That a True Story?” for more on memoirs and truth]. Instead, we pick out particular details that highlight how we have constructed the event. In the telling, our own identities are solidified as we re-experience the event, carving out a space for it in our psyche and, hopefully, the psyches of friends and family whom we want to see us in particular ways. This is just one example of how we are already rhetorical beings long before we enter a writing class.

Finally, if story serves these vital social and identity functions in our everyday lives, then it is only natural that story would play a significant role in all kinds of writing through engaging our readers, communicating and shaping values, and illustrating how we see the world working.

Stories are important at every level of writing and rhetoric, including:

These uses of story are not incidental; they are the foundation on which the appeals of these rhetorical encounters are built. [See “Adding the Storyteller’s Tools to Your Writer’s Toolbox” for specific examples of how to use stories in other genres.]

Yet claiming that stories are used in all kinds of writing almost goes without saying, right? I mean we all know, if we pause to think about it, that different genres use stories. A more compelling claim is, as Newkirk argues, that “narrative is the deep structure for all good sustained writing” (23).

So, yes, we all tell stories with a purpose. They are a form of action, of entering and living in the world. Possibly you’ve never thought about story in quite this way but we assume it’s not too surprising. What might be more surprising is that this deep structure of story in our lives can also be found in traditional academic writing, researched arguments, and even scientific studies when there is no obvious “story” or vignette present. For more on this see “Rhetorical Stories.” En fin, maybe “academic” writing is not as different as we might imagine from the stories we tell each day to the people we love.

Newkirk, Thomas. Mind Made for Stories: How We Really Read and Write Informational and Persuasive Texts. Portsmouth: Heinemann, 2014. Text.

Open English @ SLCC by Ron Christiansen is licensed under a Creative Commons Attribution-NonCommercial 4.0 International License, except where otherwise noted.