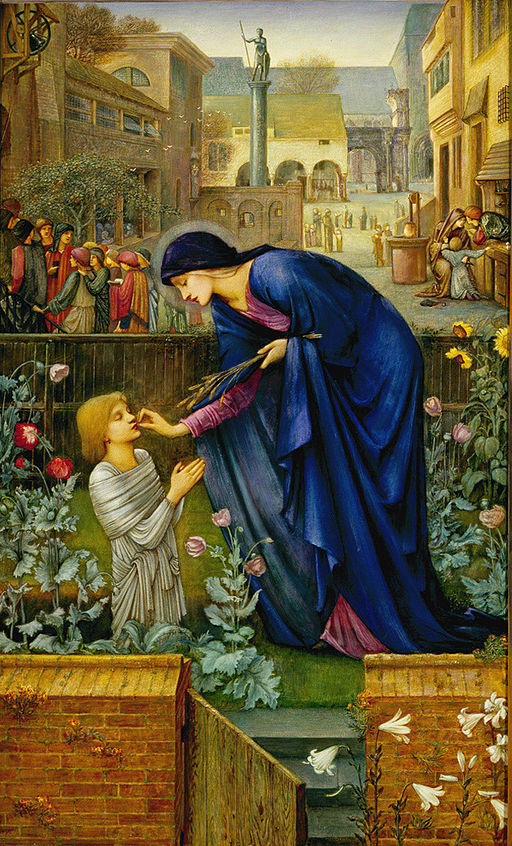 The General Prologue names the prioress as “Madame Eglantine,” and describes her impeccable table manners and soft-hearted ways. Her portrait suggests she is likely in religious life as a means of social advancement, given her aristocratic manners and mispronounced French (“The Prioress’s Tale”). She maintains a secular lifestyle, including keeping lap dogs that she privileges over people, a fancy rosary, and a brooch inscribed with “Amor vincit omnia” (‘Love Conquers All’). Like many religious figures in the Canterbury Tales, there is a tension between what we know of her in the Prologue–her affected, aristocratic air–and the brutality of the Tale she tells.

The Prioress’ Tale falls into a common medieval genre, a category of stories grouped as “miracle of the Virgin” accounts. It also blends elements of the antisemitic trope of a pious child killed by the enemies of the faith; the first example of which in English was written about William of Norwich.

Readers are told that the story takes place in a small Christian town in Asia. The story is about a widowed mother of a seven-year-old son who attends a Christian school near a Jewish ghetto. Her son takes an interest in the Virgin Mary and pushes himself to learn the ‘Alma Redemptoris,’ a liturgical hymn, from an older schoolmate. He then proudly belts the song on his way to and from school, right through the Jewish ghetto every day. According to the Prioress, this arouses Satan himself who then whispers in the ears of the Jewish people that this boy is singing this hymn to disrespect them and that he is a disgrace. The Jewish people then hire a murderer to rid them of this disrespectful boy. One day, as the child walked and sang his way home, the murderer slit his throat and threw him into a cesspit leaving him to die a gruesome death. Panicked when her son doesn’t return home, the widow searches everywhere for her son, asking everyone in the ghetto if they had seen him. In complete despair, she simply begins singing the ‘Alma Redemptoris’ and, by miracle, she hears her son’s voice singing in response. She finds him and calls the town Provost who sees the horror that happened and orders all of the Jewish people to be bound, hanged, and quartered. They take the young boy’s corpse to an abbey nearby and as the service goes on the boy begins speaking explaining to them how the Virgin Mary had come down from the heavens and placed a grain in his mouth insisting that he sing the ‘Alma Redemptoris’ until his burial. With this, the Provost removed the grain from the boy’s tongue and buried him as a martyr.

There is a tension between redemption and barbarity in this tale. The religious theme is the most obvious and prominent, seeing as how it is a “miracle of the virgin” and the boy, though he lost his life, is redeemed in the afterlife.  It is the boy’s devotion to the Virgin that is encouraged and enforced by his mother, peers, and what ultimately keeps his soul pure. For this reason, he passes as a martyr who is going to enjoy the rest of his days in the Kingdom of Christ.

Similarly, there is a clear analogy between the “single mother” depicted here and the virgin mother herself. The “cult of the Virgin” arose in the 11th century, where she was worshipped as “the Bride of Christ, Personification of the Church, Queen of Heaven, and Intercessor for the salvation of humankind,” particularly in France, where many cathedrals were dedicated in her name–most famously, “Notre Dame” (“The Virgin Mary in Later Middle Ages”). A strong theme of motherly loyalty and duty runs throughout the story as well as in the figure of the Prioress herself. On the other hand, the Jewish people are depicted as bloodthirsty and cruel. Anti-Semitism was rampant throughout Europe during this time with Jews serving as scapegoats to explain economic woes, crop failure, and to serve as a distraction from Church corruption. Tales of the “blood libel” served as justification for Jewish persecution, expulsion, and ethnic genocide.

The tale is related to various so-called “blood libel” stories common at the time in which Jews were accused of sacrificing Christian children in order to use their blood for ritual purposes. Jews were banished from England in 1290, one hundred years before the tale was written, so it was set in some unnamed exotic, Asian, city. Jews, unknown in England, are simply anonymous mythical demons, like gypsies, fairies, trolls, and wicked monks common in other such stories. The Physician’s Tale is a similar story about an innocent child persecuted by an implacable enemy but without the antisemitic tone.

lines 36-49: A Jewish quarter and a Christian school

lines 99-112: The boy sings Alma redemptoris in the Jewish quarter

lines 169-182: The dead boy is brought to an abbey and the Jews are punished

lines 183-196: The dead boy sings again and the abott asks how that is possible

Heere is ended the Prioresses Tale.

Kökbugur, Sinan, ed. The Canterbury Tales (in Middle and Modern English. Librarius.com, 1997, is copyright protected but reproduction expressly allowed for non-profit, educational use.