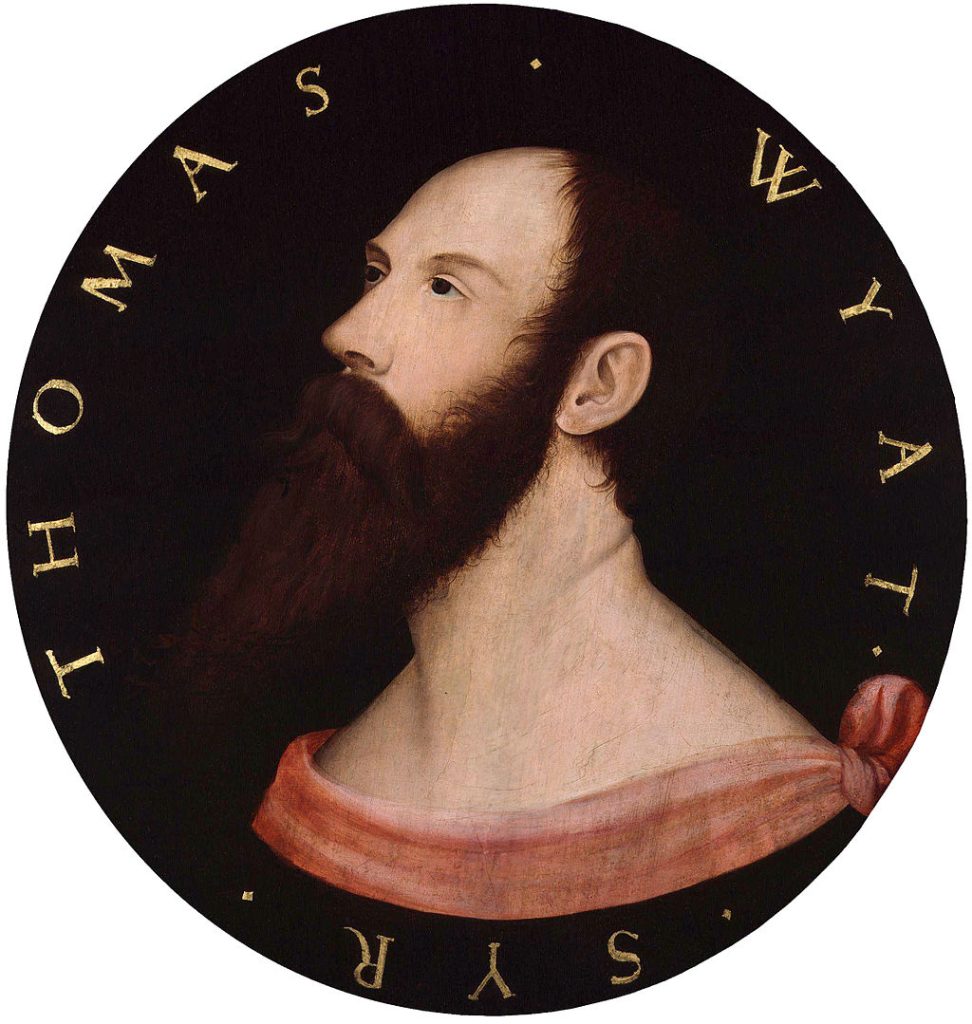 Sir Thomas Wyatt (1503 – 1542) was a 16th-century English politician, ambassador, and lyric poet credited with introducing the sonnet to English literature. His professed object was to experiment with the English language, to civilise it, to raise its powers to equal those of other European languages. A significant amount of his literary output consists of translations and imitations of sonnets by Italian poet Petrarch; he also wrote sonnets of his own.

He was born at Allington Castle near Maidstone in Kent, though the family was originally from Yorkshire. His family adopted the Lancastrian side in the Wars of Roses. His mother was Anne Skinner, and his father Henry had been a Privy Councillor of Henry VII and remained a trusted adviser when Henry VIII ascended the throne in 1509. Thomas followed his father to court after his education at St John’s College, Cambridge. Entering the King’s service, he was entrusted with many important diplomatic missions. In public life his principal patron was Thomas Cromwell, after whose death he was recalled from abroad and imprisoned (1541). Though subsequently acquitted and released, shortly thereafter he died. His poems were circulated at court and may have been published anonymously in the anthology The Court of Venus (earliest edition c.1537) during his lifetime, but were not published under his name until after his death; the first major book to feature and attribute his verse was Tottel’s Miscellany (1557), printed 15 years after his death.

Wyatt’s poetry reflects classical and Italian models, but he also admired the work of Geoffrey Chaucer, and his vocabulary reflects that of Chaucer; for example, he uses Chaucer’s word newfangleness, meaning fickle, in They flee from me that sometime did me seek. Many of his poems deal with the trials of romantic love, and the devotion of the suitor to an unavailable or cruel mistress.[18] Other poems are scathing, satirical indictments of the hypocrisies and pandering required of courtiers who are ambitious to advance at the Tudor court.

The Long Love that in my thought doth Harbor

The longë love that in my thought doth harbour
And in mine hert doth keep his residence,
Into my face presseth with bold pretence
And therein campeth, spreading his banner.
She that me learneth to love and suffer
And will that my trust and lustës negligence
Be rayned by reason, shame, and reverence,
With his hardiness taketh displeasure.
Wherewithall unto the hert’s forest he fleeth,
Leaving his enterprise with pain and cry,
And there him hideth and not appeareth.
What may I do when my master feareth
But in the field with him to live and die?
For good is the life ending faithfully.

Whoso list to hunt ? I know where is an
hind!
But as for me, alas!  I may no more,
The vain travail hath wearied me so sore ;
I am of them that furthest come behind.
Yet may I by no means my wearied mind
Draw from the deer, but as she fleeth afore
Fainting I follow; I leave off therefore,
Since in a net I seek to hold the wind.
Who list her hunt, I put him out of doubt
As well as I, may spend his time in vain !
And graven with diamonds in letters plain,
There is written her fair neck round about ;
‘ Noli me tangere; for Cæsar’s I am,
And wild for to hold, though I seem tame.’

Farewell, Love, and all thy laws for
ever ;
Thy baited hooks shall tangle me no more.
Senec, and Plato, call me from thy lore,
To perfect wealth, my wit for to endeavour;
In blind error when I did persevere,
Thy sharp repulse, that pricketh aye so sore,
Taught me in trifles that I set no store ;
But scaped forth thence, since, liberty is lever1
Therefore, farewell! go trouble younger hearts,
And in me claim no more authority :
With idle youth go use thy property,2
And thereon spend thy many brittle darts :
For, hitherto though I have lost my time,
Me list no longer rotten boughs to clime.

I Find no Peace

I find no peace, and all my war is done ;
I fear and hope, I burn, and freeze like
ice ;
I fly aloft, yet can I not arise ;
And nought I have, and all the world I seize on,
That locks nor loseth, holdeth me in prison,
And holds me not, yet can I scape no wise :
Nor lets me live, nor die, at my devise,
And yet of death it giveth me occasion.
Without eye I see ; without tongue I plain :
I wish to perish, yet I ask for health ;
I love another, and thus I hate myself ;
I feed me in sorrow, and laugh in all my pain.
Lo, thus displeaseth me both death and life,
And my delight is causer of this strife.

My galley chargèd with forgetfulness
Thorough2 sharp seas, in winter nights doth pass
‘Tween rock and rock; and eke mine enemy, alas,
That is my lord, steereth with cruelness,
And every oar a thought in readiness,
As though that death were light in such a case.
An endless wind doth tear the sail apace
Of forcèd sighs and trusty fearfulness.
A rain of tears, a cloud of dark disdain,
Hath done the wearied cords great hinderance;
Wreathèd with error and eke with ignorance.
The stars be hid that led me to this pain.
Drownèd is reason that should me consort,
And I remain despairing of the port.

Divers doth use, as I have heard and know,
When that to change their ladies do begin,
To mourn and wail, and never for to lynn,1
Hoping thereby to ‘pease their painful woe.
And some there be that when it chanceth so
That women change, and hate where love hath been,
They call them false, and think with words to win
The hearts of them which otherwhere doth grow.
But as for me, though that by chance indeed
Change hath outworn the favour that I had,
I will not wail, lament, nor yet be sad,
Nor call her false that falsely did me feed ;
But let it pass, and think it is of kind
That often change doth please a woman’s mind.

What ‘vaileth truth, or by it to take pain ?
To strive by steadfastness for to attain
How to be just, and flee from doubleness ?
Since all alike, where ruleth craftiness,
Rewarded is both crafty, false, and plain.
Soonest he speeds that most can lie and feign :
True meaning heart is had in high disdain.
Against deceit and cloaked doubleness,
What ‘vaileth truth, or perfect steadfastness ?
Deceived is he by false and crafty train,
That means no guile, and faithful doth remain
Within the trap, without help or redress :
But for to love, lo, such a stern mistress,
Where cruelty dwells, alas, it were in vain.
What ‘vaileth truth !

Madam, withouten many words,
Once I am sure you will, or no :
And if you will, then leave your
bourds,
And use your wit, and shew it so,
For, with a beck you shall me call ;
And if of one, that burns alway,
Ye have pity or ruth at all,
Answer him fair, with yea or nay.
If it be yea, I shall be fain ;
If it be nay—friends, as before ;
You shall another man obtain,
And I mine own, and yours no more.

They Flee from Me

They flee from me, that sometime did me
seek,
With naked foot stalking within my
chamber :
Once have I seen them gentle, tame, and meek,
That now are wild, and do not once remember,
That sometime they have put themselves in danger
To take bread at my hand; and now they range
Busily seeking in continual change.
Thanked be Fortune, it hath been otherwise
Twenty times better; but once especial,
In thin array, after a pleasant guise,
When her loose gown did from her shoulders fall,
And she me caught in her arms long and small,
And therewithal sweetly did me kiss,
And softly said, ‘ Dear heart, how like you this ?’
It was no dream ; for I lay broad awaking :
But all is turn’d now through my gentleness,
Into a bitter fashion of forsaking ;
And I have leave to go of her goodness ;
And she also to use new fangleness.
But since that I unkindly so am served :
How like you this, what hath she now deserved ?

Farewell love and all thy laws forever;
Thy baited hooks shall tangle me no more.
Senec and Plato call me from thy lore
To perfect wealth, my wit for to endeavour.
In blind error when I did persever,
Thy sharp repulse, that pricketh aye so sore,
Hath taught me to set in trifles no store
And scape forth, since liberty is lever.
Therefore farewell; go trouble younger hearts
And in me claim no more authority.
With idle youth go use thy property
And thereon spend thy many brittle darts,
For hitherto though I have lost all my time,
Me lusteth no lenger rotten boughs to climb.

Blame not my Lute

Blame not my Lute ! for he must sound
Of this or that as liketh me ;
For lack of wit the Lute is bound
To give such tunes as pleaseth me ;
Though my songs be somewhat strange,
And speak such words as touch thy change,
Blame not my Lute !

My Lute ! alas ! doth not offend,
Though that perforce he must agree
To sound such tunes as I intend,
To sing to them that heareth me ;
Then though my songs be somewhat plain,
And toucheth some that use to feign,
Blame not my Lute !

My Lute and strings may not deny
But as I strike they must obey ;
Break not them then so wrongfully,
But wreak thyself some other way ;
And though the songs which I indite
Do quit thy change with rightful spite,
Blame not my Lute !

Spite asketh spite, and changing change,
And falsèd faith must needs be known ;
The fault so great, the case so strange ;
Of right it must abroad be blown :
Then since that by thine own desart
My songs do tell how true thou art,
Blame not my Lute !

Blame but thyself that hast misdone,
And well deservèd to have blame ;
Change thou thy way, so evil begone,
And then my Lute shall sound that same ;
But if ’till then my fingers play,
By thy desert their wonted way,
Blame not my Lute !

Farewell !  unknown ; for though thou break
My strings in spite with great disdain,
Yet have I found out for thy sake,
Strings for to string my Lute again :
And if, perchance, this sely rhyme
Do make thee blush, at any time,
Blame not my Lute !

Stand, whoso list, upon the slipper wheel
Of high estate ; and let me here rejoice,
And use my life in quietness each dele,*
Unknown in court that hath the wanton toys :
In hidden place my time shall slowly pass,
And when my years be past withouten noise,
Let me die old after the common trace ;
For gripes of death doth he too hardly pass,
That knowen is to all, but to himself, alas,
He dieth unknown, dasèd with dreadful face.