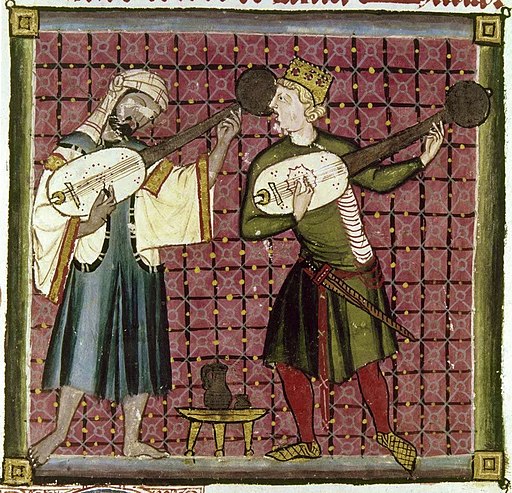 The “Middle English Lyric” is a genre of English Literature, popular in the 14th Century, is characterized by its brevity and emotional expression. Conventionally, the lyric expresses “a moment,” usually spoken or performed in the first person. Although some lyrics have narratives, the plots are usually simple to emphasize an occasional, common experience. Even though Lyrics appear individual and personal, they are not “original;” instead, lyrics express a common state of mind. Those states of mind are wide in range. Some deal with religious topics pertaining to Jesus or the Virgin Mary, focusing on Christ’s sacrifice and salvation, or Mary’s roles as a mother and intercessor. Other religious topics focus on Adam and the Fall, or the necessity of faith. Others are secular, focusing on ale, women, and the simple joys of life. Some are sarcastic, take on satire, humorous, and sometimes even crude. Two of the lyrics presented below are given alongside their original middle English versions.

Middle English Lyrics were meant to be heard, not read. Keeping in mind an aural audience, the lyric is usually structured with poetic devices: an obvious rhyme scheme, internal rhyme, wordplay, allegory, refrain, and sometimes musical effects. The rhyme scheme primarily functions as a mnemonic device for the audience. The Refrain, however, has several critical functions. The Refrain gives the lyric unity and provides commentary (this is not unlike the bob and wheel found in Sir Gawain and the Green Knight). In addition to functioning thematically, the refrain encourages the audience to participate in singing the lyric. Finally, Musical Effects also encourage audience participation, and they take the form of rhythms and sounds (for example, onomatopoeia is not an uncommon trope employed). We do not know if they were set to music, but it could be possible, as several include music for accompaniment.

Most Middle English Lyrics are anonymous. Because the lyrics reflect on a sort of “community property” of ideas, the concept of copyrighting a lyric to a particular author is usually inappropriate. Additionally, identifying authors is very difficult. Most lyrics are often un-dateable, and they appear in collections with no apparent organic unity. It is most likely many lyrics that survive today were widely recited in various forms before being written down. Evidence for this appears in a variety of Middle English poetry, especially Geoffrey Chaucer’s The Canterbury Tales. Many of Chaucer’s lines bear an uncanny resemblance to Middle English Lyrics. Since these lyrics were written in a clear medieval Latin, scholars infer that these authors were likely clerics, familiar with other languages as well. Since the topics of the lyrics are secular, it is possible that the clerics were not writing the lyrics, but simply writing them down. It has also been inferred that the authors of these lyrics were primarily male. Some lyrics are written in a female voice, but it would be unlikely since those lyrics are written in a harsh satire against women.

Where are they that lived before,

Hounds they led and hawks they bore

And had both field and chase?

Nets of gold bind up the hair,

They ate and drank and made them glad

Their life was all with pleasure led,

They bore themselves full proud and high

And in the twinkling of an eye

Their souls were all forlorn.

Where is that laughing and that song

The pride with which they passed along,

The hawk, and hound, and bower?

All that joy is gone away,

That weal is come to welaway,

To many a bitter hour.

They took their heaven while they were here

And now in hell they lie in fere;

The fire it burneth ever,

Long is wy, and long is wo,

From thence come they never.

[Note: When the word “earth” is capitalized (as “Earth”) it is mean to signify mankind, the creature made from the dust of the earth.]

Earth out of earth is wondrously wrought,

Earth of earth hath got a dignity of naught,

Earth upon earth hath set all his thought,

How that Earth upon earth may be high brought.

Earth upon earth would be a King;

But how Earth shall to earth thinketh nothing;

When that earth biddeth Earth his rentes home bring,

Then shall Earth out of earth have a piteous parting.

Then saith Earth to earth: “Now all this is ours!”

When that Earth upon earth hath built up his bowers,

Then shall Earth upon earth suffer sharp showres.

Earth goes upon earth as mold upon mold,

So goes Earth upon earth all glittering in gold,

As though Earth unto earth never go should,

And yet Earth shall to earth before that he would.

O thou Earth that on earth travailest night and day,

To deck thee, Earth, to paint thee with wanton array;

Yet shalt thou, Earth, for all thy earth, make thou it never so quaint and gay,

Out of this earth into the earth, there to cling as a clod of clay.

O wretched man, why art thou proud that art of earth maked?

Hither broughtest thou no shroud, but poor came thou and naked!

When thy soul is gone out, and thy body in earth raked,

Then thy body that was rank and undevout, of all men is hated.

Therefore shall Earth under earth have hideous torment.

Why that Earth too must love earth, wonder me think,

Or why that Earth for superflue earth, too sore sweat will or swink;

For when that Earth upon earth is brought within the brink,

Then shall Earth of the earth have a rueful swink.

So, Earth upon earth, consider thou may

Why should Earth upon earth go now so stout or gay

When Earth shall pass out of earth in so poor array?

Therefore, thou Earth upon earth that so wickedly hast wrought,

While that thou, Earth, art upon earth, turn again thy thought,

And pray to that God upon earth that all the earth hath wrought,

That thou, Earth upon earth, to bliss may be brought.

O Thou Lord that madest this earth for this Earth, and suffered here paines ill,

Let not this Earth for this earth evil e’er spille,

But that this Earth on this earth be ever working Thy will.

So that this Earth from this earth may fly up to Thy high hill.

The life of this world

Is ruled with wind,

With wind we blowen,

With wind we lassen:

With weeping we comen,

With weeping we passen.

With stirring we beginnen

With stirring we enden,

With dread we enden.