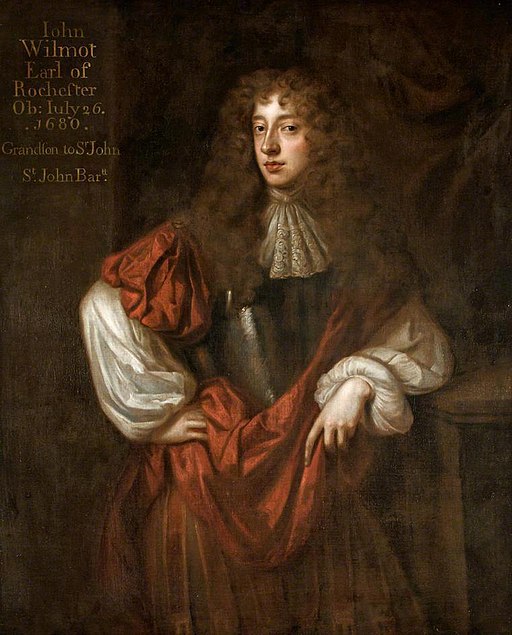 John Wilmot (1647-1680), the Second Earl of Rochester, was a Restoration Era poet today remembered for his lewdness and satire (Simon). He lived some of his adult life at the court of Charles II, where he gained a notorious reputation for his heavy drinking, vibrant conversation, and unquenchable sexual appetite (“John Wilmot Earl of Rochester”). Life at court greatly impacted and inspired his writing. His blue language and explicit imagery has gone so far as to cement him as “the single greatest pornographer produced in the English language.” Wilmot employed impeccable wit and satire in his writings, making him a hallmark poet of the Restoration Era.

Wilmot was very much a function of his time. In 1649, King Charles I was executed after losing a civil war between the English monarchy and Parliament. After his death, England was under the parliamentary rule of the English Commonwealth. The Commonwealth would maintain rule for only 11 years before Charles II would be restored to the throne; this period of parliamentary rule is referred to as the ​Interregnum (Thomas). Life during the Interregnum was stringent – a strict Puritan code was enforced and theaters were banned.​ After Charles II was restored to the English throne there was a distinct cultural shift in England. The strict Puritan morality once enforced by the Commonwealth was no longer. Racy comedy became a popular fixture in English theater and literature. Popular forms of writing that we know today like the biography, novel, and travel writing all originated in the Restoration Era (“Restoration Literature”). Writers like Wilmot indulged in the libertine spirit of court life, encouraged by new scientific advancements, philosophical concepts, and economic conditions.

A common characteristic in Restoration Era literature is ‘extremes,’ as comedy and satire would nudge the line between what an audience or reader would consider appropriate (“Restoration Literature”). Restoration literature lasted into the late 17th century, and some think into the 18th century.

These selected works of Wilmot are examples of his sexual dalliances and philosophical ponderings. ​ The Disabled Debauchee ​is a celebration of Wilmot’s indulgences. He compares his reflection on sexual conquests to a soldier reliving the excitement of battle. He claims he will look back on his life with joy and sentiment, even if he is riddled with pox and scars from syphilis. Fitting, as he ended up dying from a sexually transmitted infection. It is a humorous poem, with a mixture of sentimentality and ridiculous hedonism.​  The Imperfect Enjoyment ​is about a sexual encounter, bringing the reader along for foreplay, climax, and a refractory period.

The narrator finds himself upset with his partner for being too good of a lover; he wishes he could have enjoyed himself longer. The last poem, ​ Upon Nothing​, is considered one of his most famous poems. The poem is a philosophical and social satire, mocking humankind for its attempts to find meaning in existence, and their assumption of self-importance in the Universe. It takes a markedly different tone than the first two poems. Rather than musing over sexual pleasures, Wilmont takes a more critical tone to the society he sees around him.

Thomas, Jonathan. “Great Events in British History: The Interregnum – The Republic When Britain Had No Monarch.” ​ Anglotopia.net​, 11 Dec. 2015, www.anglotopia.net/british-history/great-events-in-british-history-the-interregnum-the-republic-when-britain-had-no-monarch/​.  Accessed 01 May 2020.

As some brave admiral, in former war
Deprived of force, but pressed with courage still,
Two rival fleets appearing from afar,
Crawls to the top of an adjacent hill;
From whence, with thoughts full of concern, he views
The wise and daring conduct of the fight,
Whilst each bold action to his mind renews
His present glory and his past delight;
From his fierce eyes flashes of fire he throws,
As from black clouds when lightning breaks away;
Transported, thinks himself amidst the foes,
And absent, yet enjoys the bloody day;
So, when my days of impotence approach,
And I’m by pox and wine’s unlucky chance
Forced from the pleasing billows of debauch
On the dull shore of lazy temperance,
My pains at least some respite shall afford
While I behold the battles you maintain
When fleets of glasses sail about the board,
From whose broadsides volleys of wit shall rain.
Nor let the sight of honorable scars,
Which my too forward valor did procure,
Frighten new-listed soldiers from the wars:
Past joys have more than paid what I endure.
Should any youth (worth being drunk) prove nice,
And from his fair inviter meanly shrink,
’Twill please the ghost of my departed vice
If, at my counsel, he repent and drink.
Or should some cold-complexioned sot forbid,
With his dull morals, our bold night-alarms,
I’ll fire his blood by telling what I did
When I was strong and able to bear arms.
I’ll tell of whores attacked, their lords at home;
Bawds’ quarters beaten up, and fortress won;
Windows demolished, watches overcome;
And handsome ills by my contrivance done.
Nor shall our love-fits, Chloris, be forgot,
When each the well-looked linkboy strove t’ enjoy,
And the best kiss was the deciding lot
Whether the boy fucked you, or I the boy.
With tales like these I will such thoughts inspire
As to important mischief shall incline:
I’ll make him long some ancient church to fire,
And fear no lewdness he’s called to by wine.
Thus, statesmanlike, I’ll saucily impose,
And safe from action, valiantly advise;
Sheltered in impotence, urge you to blows,
And being good for nothing else, be wise.

Naked she lay, clasped in my longing arms,
I filled with love, and she all over charms;
Naked she lay, clasped in my longing arms,
I filled with love, and she all over charms;
Both equally inspired with eager fire,
Melting through kindness, flaming in desire.
With arms, legs, lips close clinging to embrace,
She clips me to her breast, and sucks me to her face.
Her nimble tongue, love’s lesser lightning, played
Within my mouth, and to my thoughts conveyed
Swift orders that I should prepare to throw
The all-dissolving thunderbolt below.
My fluttering soul, sprung with the pointed kiss,
Hangs hovering o’er her balmy brinks of bliss.
But whilst her busy hand would guide that part
Which should convey my soul up to her heart,
In liquid raptures I dissolve all o’er,
Melt into sperm, and spend at every pore.
A touch from any part of her had done ’t:
Her hand, her foot, her very look’s a cunt.
Smiling, she chides in a kind murmuring noise,
And from her body wipes the clammy joys,
When, with a thousand kisses wandering o’er
My panting bosom, “Is there then no more?”
She cries. “All this to love and rapture’s due;
Must we not pay a debt to pleasure too?”
But I, the most forlorn, lost man alive,
To show my wished obedience vainly strive:
I sigh, alas! and kiss, but cannot swive.
Eager desires confound my first intent,
Succeeding shame does more success prevent,
And rage at last confirms me impotent.
Ev’n her fair hand, which might bid heat return
To frozen age, and make cold hermits burn,
Applied to my dear cinder, warms no more
Than fire to ashes could past flames restore.
Trembling, confused, despairing, limber, dry,
A wishing, weak, unmoving lump I lie.
This dart of love, whose piercing point, oft tried,
With virgin blood ten thousand maids has dyed,
Which nature still directed with such art
That it through every cunt reached every heart—
Stiffly resolved, ’twould carelessly invade
Woman or man, nor ought its fury stayed:
Where’er it pierced, a cunt it found or made—
Now languid lies in this unhappy hour,
Shrunk up and sapless like a withered flower.
Thou treacherous, base deserter of my flame,
False to my passion, fatal to my fame,
Through what mistaken magic dost thou prove
So true to lewdness, so untrue to love?
What oyster-cinder-beggar-common whore
Didst thou e’er fail in all thy life before?
When vice, disease, and scandal lead the way,
With what officious haste doest thou obey!
Like a rude, roaring hector in the streets
Who scuffles, cuffs, and justles all he meets,
But if his king or country claim his aid,
The rakehell villain shrinks and hides his head;
Ev’n so thy brutal valor is displayed,
Breaks every stew, does each small whore invade,
But when great Love the onset does command,
Base recreant to thy prince, thou dar’st not stand.
Worst part of me, and henceforth hated most,
Through all the town a common fucking post,
On whom each whore relieves her tingling cunt
As hogs on gates do rub themselves and grunt,
Mayst thou to ravenous chancres be a prey,
Or in consuming weepings waste away;
May strangury and stone thy days attend;
May’st thou never piss, who didst refuse to spend
When all my joys did on false thee depend.
And may ten thousand abler pricks agree
To do the wronged Corinna right for thee.

Nothing! thou elder brother even to Shade:
That hadst a being ere the world was made,
And well fixed, art alone of ending not afraid.
Ere Time and Place were, Time and Place were not,
When primitive Nothing Something straight begot;
Then all proceeded from the great united What.
Something, the general attribute of all,
Severed from thee, its sole original,
Into thy boundless self must undistinguished fall;
Yet Something did thy mighty power command,
And from fruitful Emptiness’s hand
Snatched men, beasts, birds, fire, air, and land.
Matter the wicked’st offspring of thy race,
By Form assisted, flew from thy embrace,
And rebel Light obscured thy reverend dusky face.
With Form and Matter, Time and Place did join;
Body, thy foe, with these did leagues combine
To spoil thy peaceful realm, and ruin all thy line;
But turncoat Time assists the foe in vain,
And bribed by thee, destroys their short-lived reign,
And to thy hungry womb drives back thy slaves again.
Though mysteries are barred from laic eyes,
And the divine alone with warrant pries
Into thy bosom, where truth in private lies,
Yet this of thee the wise may truly say,
Thou from the virtuous nothing dost delay,
And to be part with thee the wicked wisely pray.
Great Negative, how vainly would the wise
Inquire, define, distinguish, teach, devise,
Didst thou not stand to point their blind philosophies!
Is, or Is Not, the two great ends of Fate,
And True or False, the subject of debate,
That perfect or destroy the vast designs of state—
When they have racked the politician’s breast,
Within thy Bosom most securely rest,
And when reduced to thee, are least unsafe and best.
But Nothing, why does Something still permit
That sacred monarchs should at council sit
With persons highly thought at best for nothing fit,
While weighty Something modestly abstains
From princes’ coffers, and from statemen’s brains,
And Nothing there like stately Nothing reigns?
Nothing! who dwell’st with fools in grave disguise
For whom they reverend shapes and forms devise,
Lawn sleeves, and furs, and gowns, when they like thee look wise:
French truth, Dutch prowess, British policy,
Hibernian learning, Scotch civility,
Spaniards’ dispatch, Danes’ wit are mainly seen in thee.
The great man’s gratitude to his best friend,
Kings’ promises, whores’ vows—towards thee may bend,
Flow swiftly into thee, and in thee ever end.

Wilmot, John. The Poetical Works of the Earl of Rochester, C. Cooke, 1800, is licensed under no known copyright.